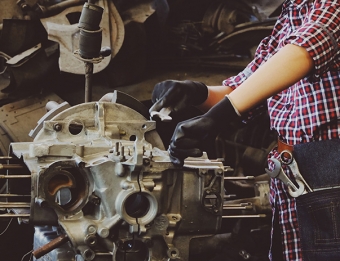 Much of NWPB’s work focuses on the state of the labour force and related indicators throughout Niagara. Given this, NWPB will be featuring monthly blog posts highlighting information about industries in Niagara. The focus for this month is manufacturing. Employment data for industries are obtained from the Labour Force Survey which are based on the St. Catharines-Niagara Census Metropolitan Area (CMA) and, therefore, do not include Grimsby or West Lincoln. Results from the Labour Force Survey indicate that approximately 21,600 individuals residing in Niagara reported being employed in manufacturing throughout 2017. This puts manufacturing as the fourth largest industry in which people reported employment.
Figure 1 shows the number of employed individuals in manufacturing. This figure also shows that although the manufacturing industry saw an employment dip in 2015, it has now increased to almost to the same number of employed individuals that was seen in 2013. Figure 2 shows the percentage of all Niagara residents’ employment that is represented by manufacturing. Of note, the manufacturing trends seen locally in Niagara mirror those seen at a provincial level.

Table 2 dives deeper into manufacturing to provide an outline of the most common occupations within the industry.

Want to know more about in-demand jobs in manufacturing? Contact us